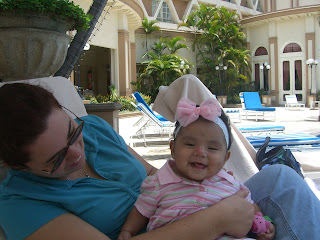 Miranda's foster mother, grandmother, and the facilitator were right on time this morning. Miranda is doing great...rolling over both ways, almost sitting up on her own, weighs around 16.5 lbs. Just about perfect....except for the big, huge mosquito bite on her nose!! We had a nice morning at the pool. Miranda took a nap in the stroller and we had a little birthday party for Max poolside. The workers at the Westin were awesome...balloons, singing, the whole works!!
I'm now on hold with Bank of America trying to figure out why my ATM card won't work!!!! AAAHHHGG!! I just want to get some Quetzales so we can buy Pollo Campero!!
I could write a ton more, but I'm too tired...I'll just post another for you! I just got off the phone with Bank of America...hope it works now. 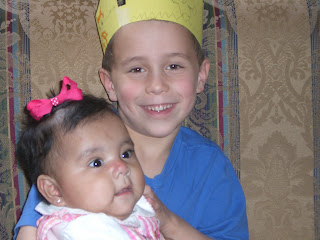 Oh Michele -- this is so exciting. How amazing, I am sure!! She is just beautiful!!

PS...I love how you've had her for less than a day...and she had two different outfits and bows on already...ahhhh, girls! Gotta love them!! Wait until she goes to her first daddy-daughter dance!! :-)

Happy Birthday Max!! What an exciting memory to have forever.
We continue to pray for all of you. What a blessing and delightful adventure!

Becky for the Hunters

I am so happy for you guys and Miranda looks so happy too! I could totally go for some pollo campero about now too. =)

Congratulations! Miranda looks wonderful - what a beautiful little girl. We are super excited for your family and praising God for all the evidences of His hand on this trip. And even though he's never met us, happy birthday to Max as well... maybe he'll come to expect a new brother or sister for every birthday?

So happy you arrive safely and God provided, of course.
Wonderful pictures!
Miranda looks quite happy and content in her Mommy's lap as well as in brother Max's arms.
Sounds like quite a memorable birthday for Max.
Enjoy!
Love to all,
Mom/Gramma Donna

Hey Herndons,
Congratulations and praise God for a safe trip down! So happy for you guys and praying for a quick and safe return. Miranda is beautiful and I can't wait to meet her in Shelbyville! Happy Birthday to Maxie! I almost didn't recognize him without his curls! Love you all.
Love, Cousin Dawn

Michele, Matt, Mitchell, Max--Miranda!
SOMEONE is WATCHING over you, and LOOKING OUT for you, from above.... God bless your heart for the poor. 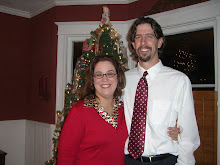